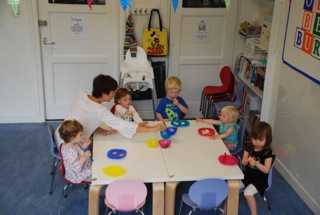 Finding an English-speaking playgroup in Amsterdam can be a challenge. For Becky Churilla, the Robbeburg International Playgroup offered the perfect environment for her and her children to connect with other families.

My family moved to Amsterdam a little over three and a half years ago, when my oldest son was 14 months old and I was newly pregnant. Eager to find my super social child some English-speaking playmates, I ventured into Robbeburg (after a Google search) three weeks after our move. It was snowing and I went the wrong way after we got off the tram, but we made our way there (I laugh now as it’s so easy to find). It sort of felt like walking into class on the first day when I pulled the door back to go inside.

My nervousness quickly melted away as I was immediately welcomed and settled into a fast conversation with two expat moms, one of whom said she married a Dutch man and wanted her son to be exposed to English more, and the other whom had been living in the country for 10+ years with her Canadian husband.

I became a member that first day because I felt immediately at home in the environment and wanted something consistent my son could count on each week. He looked forward to the ball pit, fast bumpy slide and craft time, and I looked forward to coffee with other moms, and sometimes dads, happily knowing my son was playing with the children who would become his best friends in a safe, contained environment. When the weather warmed up, it was an added bonus to discover the enclosed playground out back with sandbox and ride-on toys.

This weekly ritual slowly built the community around which much of our life still revolves. If I needed a recommendation for a contractor, restaurant or anything really, I would ask my Robbeburg friends and get great, trusted info – so much so that my husband began to refer to the group as the “Robbeburg Mafia”. But mafia is, of course, a misnomer: Robbeburg really became a lifeline for me and my family, providing a much-needed safety net and peace of mind so far from “home”.

Today, I take my youngest son to playgroup every week and have watched him turn from a somewhat shy, not very social kid into a friendly little charmer who eagerly looks forward (read: asks me “Can we go to Robbeburg now?” repeatedly) to seeing his buddies every week. My oldest still sees his Robbeburg friends and we’re about to rent the space again for his fifth birthday in the place where he, and hundreds of others, have grown up in Amsterdam.

Robbeburg is a non-profit, international playgroup in the Rivierenbuurt neighborhood of Amsterdam, and has been run entirely by volunteers since 1975. You can learn more at: www.robbeburg.com.

Becky Churilla is a freelance writer. She lives in Amsterdam with her husband and two sons.