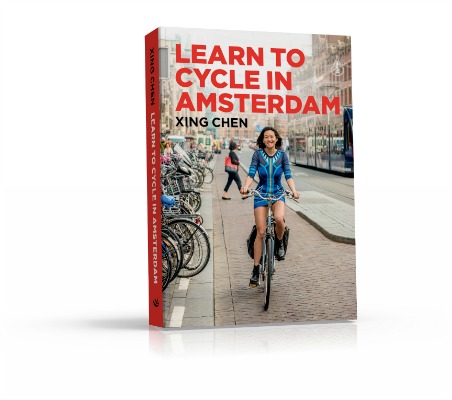 Ruth Oei-Abraham shares her review of the book Learn to Cycle in Amsterdam, a guide to the most practised activity in The Netherlands.

Neuroscientist and author Xing Chen (pictured at left) grew up in Singapore and lived in the US and the UK before moving to the Netherlands in 2014. And what would be the first thing Chen bought on the first day she arrived in the Netherlands? Exactly. A bike. Or een stalen ros as we like to call them in the Netherlands – a steel horse. Learn to Cycle in Amsterdam is a must-read if you are not a born-and-bred Amsterdammer – I would even suggest for the local-born as well – if you want to master your way around Amsterdam on two wheels.

In this practically-sized, 157-page handbook, Chen explains everything you need to know – and every skill you need to master – about cycling in and around Amsterdam. Although most people have learnt how to bike in their youth and have probably done it for years, cycling in Amsterdam is a completely different story. That is why this book, as Chen explains in the first pages, is meant for people who already know how to ride a bicycle. It does not cover the technicalities of learning to cycle from the beginning.

As a Dutch national by origin, but living in London since 2005, I have personal experience of the huge difference between cycling elsewhere and cycling in The Netherlands. Especially when participating as a cyclist in the hectic traffic of Amsterdam. As Chen rightly states, “cyclists, not car drivers, rule the road.” This rule changes a lot about the way we cycle here.

What I found most appealing about this book is how Chen covers all the different aspects of cycling in Amsterdam. It wasn’t until I read this book that I realised how we underestimate the skills and knowledge you need to be a confident cyclist in Amsterdam. The often dangerous situations tourists on rental bikes get themselves into prove the importance of this book.

The Netherlands is known for its cycle paths separated from the main roads where cars drive, but then, in Amsterdam and in other Dutch cities, quite suddenly cyclists have to use the busy roads as there are no separate cycle paths. This can be quite confusing and very daunting, Chen notes. Chen also takes time to explain the different types of bikes: city bikes, sport bikes, folding bikes, and the very popular bakfiets in which parents transport their kids. From the official rules regarding traffic to the “how-to-make-sure-you-will-arrive-at-your-destination” rules, Chen has got it covered.

It’s great if you have mastered cycling Amsterdam-style, as well as knowing your way around Amsterdam, but knowing what your fellow roadies are up to is just as important, if not more so. Another important message Chen tells the newbie cyclist is that you should not only think about yourself in any given moment, but also one step – and if possible two steps – ahead as to what your fellow road-users might do. “Expect the unexpected,” Chen stresses, from the bakfietsen filled with three kids (at least!) to rows of students cycling side-by-side or cars turning right at the last minute. And let’s not forget the trams that graze past, because their tracks are next to most cycle paths.

All in all, the fact that Chen herself was new to the whole way of cycling in Amsterdam, might be the reason why she was able to write down all the essential rules and facts to take part in traffic on our beloved two-wheelers. A great read for those who are new to Amsterdam bike life, but also highly recommended for parents whose kids are about to conquer the cycle paths by themselves.

Amsterdam Mamas received a free copy of this book in exchange for our honest review.

Ruth Oei-Abraham is a freelance journalist who was born and raised in Amsterdam (Amstelveen, to be precise), but moved to London in 2005 where she lives with her husband and their two sons.