Birth Stories: My Daughter Witnessed the Birth of her Brother 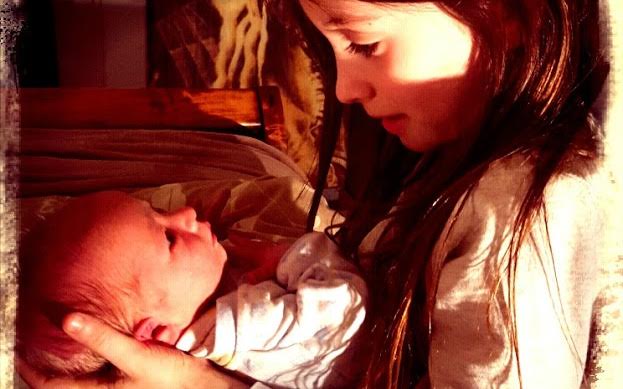 Would you let your child be present at the birth of their sibling? Hazel was unsure at first, but her eldest daughter brought something extraordinary and unexpected to the experience. Here is her birth story.

Taking a deep breath, I gathered all my strength together before channelling it downwards. Nothing happened. No movement, no change, no progress. Frustrated and exhausted, my body gave up and sent me collapsing backwards against the side of the bathtub in which I knelt. Folding in on myself, I closed my eyes and knew that I was done. I felt too tired, too sore and too old to be doing this again. I let all the turmoil rise up inside of me, feeling the self-doubt, the fear, the pain and above all the overwhelming sense of powerlessness. And then I let it go, opened my eyes and smiled. Because there, sitting right beside me, was my nine-year old daughter Indie. And she watched with her tired eyes full of wonder as she waited for me to bring her little brother into the world.

Involved from the Start

We had spent months talking through the process of giving birth, watched endless birth videos together and changed our minds countless times before my partner and I finally agreed to her request to be with us at the birth. The oldest of three children, she had already been a huge support throughout my fourth pregnancy, attending my midwife appointments with an excited curiosity. A little hippy child at heart, she had always been captivated by the magic of mother nature and wanted to learn as much as she could about the pregnancy as it progressed.

She followed with interest as her new baby brother grew from a seed into a little person that kicked with increasing strength against the side of her face as she lay with her ear pressed against my belly each evening before bed. She would laugh as she talked to him about her world, telling him stories about the younger sister and mischievous little brother that she already shared her life with. As the months passed and the last few weeks rolled in, she sat by with frustration as I experienced frequent periods of false labour, impatient to meet this little person who was already keeping her mama up all night.

The Onset of Labour

My true labour pains started on the morning of my due date, slowly progressing throughout the day. By the time night fell, my contractions were about five minutes apart. Knowing that I probably still had a long way to go, my partner took the kids to bed, promising to wake Indie when I was close to giving birth.

Due to an inherited pelvic issue I carry all my babies in a posterior position, which makes my labours extra long and painful. I knew that for the coming hours I would need to give my full attention to myself and didn’t see any advantage in my daughter being by my side, until most of the hard work was done, and I was ready to push. The pushing stage was different; that was the part that I loved. The feeling as my body opened fully, my babies turned into a better birthing position, and my body started to surge with the most intense contractions which made pushing seem easy.

The intervening hours passed quickly and by 4am we were ready for Indie to come and join us again. So far everything had gone perfectly. Thanks to the use of hypnobirthing techniques and to the amazing support and guidance of my doula Melissa, my labour had changed from something I had dreaded to an enjoyable and deeply transformational experience. Knowing that I now had full opening and was ready to push, my partner went and woke Indie gently, following behind her in silence as she quietly entered the room.

Her arrival brought with it a change of energy; everything suddenly seemed much calmer and more peaceful. I greeted her briefly as she took in the scene around her. The gentle glow of the candles, the soft hum of my birthing music and the presence of my midwife and doula as they sat quietly waiting. Seeing my full birth team around me for the first time gave me a boost. I was ready to go.

Her arrival brought with it a change of energy; everything suddenly seemed much calmer and more peaceful.

As time passed however, I began to realise that something wasn’t quite right.  I was trying to push but was getting nowhere. This was supposed to be the easy part: a few strong pushes and I could finally hold my baby in my arms. But where were my awesome pushing contractions? Where was the sensation of my baby’s head upon my cervix? Why wasn’t I rocking this?

Tears ran down my cheeks as I let myself fall backwards into the warm support of my man’s arms. I heard myself tell him that I couldn’t do it and felt him tense up behind me. He had watched me give birth three times before. He knew what I was capable of, the strength I had. Seeing me give up like this was scaring him. And I knew that of course. I felt his fear as well as my own, but I couldn’t lose myself in it because I had someone else to consider. I could feel the calm energy of my daughter beside me. I did not want her to be afraid, so I opened my eyes and lied to her, promising that everything was ok. Her face brightened into a gentle smile and I immediately knew that I had to turn that lie into the truth. Somehow I had to make this OK.

Working without the power of pushing contractions to guide me, I delved deeper into myself to find the strength I needed. I pulled myself together and pushed down with all my might. Suddenly I had contact. I could feel the baby’s head on my cervix! As I pushed again, I realised with a sense of dread what was wrong. Baby was still posterior. He hadn’t turned and his head wasn’t presenting correctly on my cervix. That was why my body wasn’t producing the pushing contractions that I so badly needed.

How My Daughter Helped Me

I had a moment of panic as I realised that I had been here before. One of my other children had been born in a posterior position. My firstborn, the beautiful daughter that now sat beside me cheering me on. Her birth had ended in an emergency episiotomy and vacuum delivery as her heartbeat plummeted. But this time would have to be different. There was no back up plan – no team of medics on standby nearby. I would have to do it alone.

Wrapping my daughter’s hand in mine, I withdrew inside myself until I found what I was looking for – the belief that I could do this. Beads of sweat gathered on my forehead as I reached into the very core of my being and gathered every last bit of strength that I had in me. Taking a deep intake of breath I released a deep primordial groan as I focused on the baby and pushed. My midwife assisted, helping my baby’s head through my cervix. Pain rocketed through my body but there was movement! Definite movement. Pausing before my next attempt, I smiled again at my daughter and heard her whisper, “You’re doing great mama!”. We went again. And again. And on and on for what felt like forever, until finally he was out and swimming his way upwards through the water and towards his first breath.

She hugged her daddy and told him, “Papa, that was the most beautiful thing I have ever seen.”

Resting him safely on my chest with his head against my heart, I lay back and looked up at my daughter, her eyes filling with tears as she hugged her daddy and told him, “Papa, that was the most beautiful thing I have ever seen.” Then everything was quiet and we sat holding each other as we basked in the warm afterglow of birth. Thankful for the safe delivery of this new life, we felt the love flowing and growing between us, knowing that our family was now complete.

Hazel West’s doula Melissa Kane can be contacted via her facebook page.

Hazel West is a writer, yoga teacher and proud mother of four who has been living in a small Dutch village in The Netherlands with her Irish partner since 2004. Her work has been published on The Tribe Magazine and Mamalode as well as on her blog www.sixbelowsealevel.com.