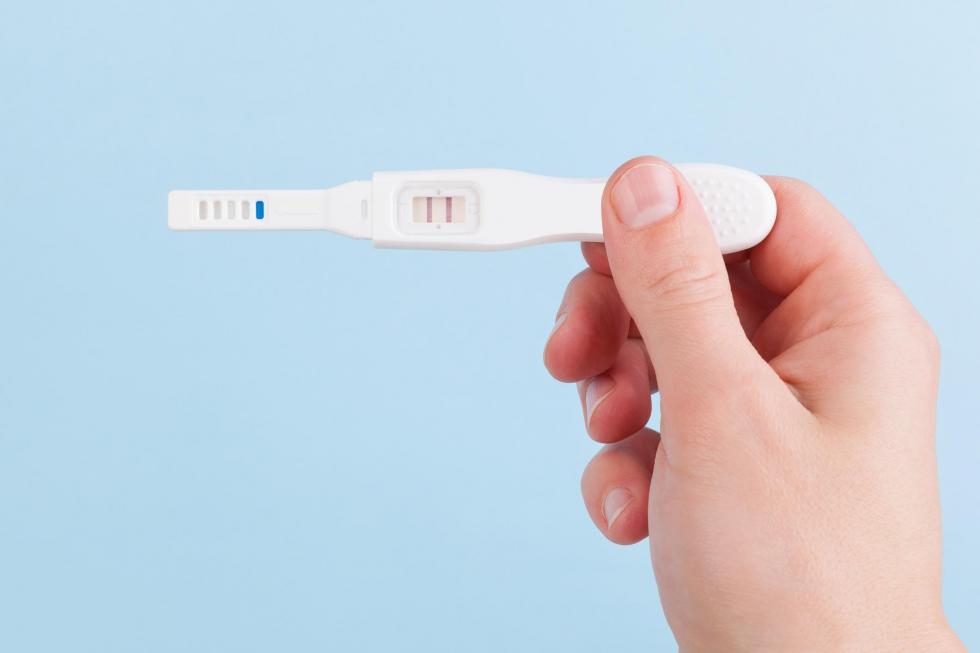 A mama with PCOS, who expected difficulty getting pregnant, shares the surprises and challenges she encountered on the way to holding her newborn son.

Very unexpectedly, I found myself pregnant in April of 2012.

I have Polycystic Ovary Syndrome (PCOS) and had been told by a few doctors that I would need medical intervention to get pregnant. It turns out that wasn’t exactly true! The baby was due December 18, and we found out at 14 weeks that we were having a little boy.

My pregnancy turned out to be full of unexpected twists and turns. I had a subchorionic hematoma that bled for several weeks during the late first and early second trimester. At 24 weeks my blood pressure was high enough that my midwife practice referred me to the gynecology practice at the hospital.

From that point forward, I was monitored extensively for high blood pressure and intrauterine growth restriction (IUGR). I stopped working at 30 weeks because of these issues and started some modified bed rest. By the end of the pregnancy, I was at the hospital three times per week. At each visit, I would have a cardiotocograph (CTG – this is called a non-stress test in the U.S.) to monitor the baby and any contractions. Once a week, I had blood work done and my urine tested for protein to rule out preeclampsia.

The doctors were confident that things were stable enough for me to go home. Little did they know I’d be back the next day!

I also had ultrasounds each week – every two weeks it was a growth scan, while the other weeks would simply check fluid levels and cord blood flow. On Monday, November 5, I went for a normal CTG appointment and reported a little dizziness. They decided to keep me overnight to monitor me. I was fine and discharged the next day after an extra CTG. The CTG on Wednesday showed some minor contractions and decelerations in the baby’s heartbeat, but the doctors were confident that things were stable enough for me to go home. Little did they know I’d be back the next day!

I was now 34 weeks pregnant. On Thursday, November 8, I realised after lunch that I hadn’t felt the baby move very much that day and was having very mild cramps. I had been told at every visit to let them know if I experienced reduced fetal movement, so I tried a few different things to see if I could get the baby moving. As I stood up from bed, I felt a strange painful popping sensation and a gush of fluid. Initially, I thought it was urine, but I went to the bathroom and found that it was bloody fluid. Then I thought it was my water breaking, so I called the hospital and called my fiancé to come home.

I hadn’t packed a bag for the hospital yet, so I quickly threw some things together. It’s a good thing I remembered the camera! My fiancé arrived home, and we drove to the hospital where the nurses hooked me up to a CTG and attempted to get a sample of fluid. At this point, everything started to get very crazy, very quickly. They determined that the fluid was actually just blood, not amniotic fluid. At one point the baby’s heartbeat was lost completely on the trace, despite having a good reading, so the junior doctor who was in the room hit the emergency button. His heartbeat came back up, but the room filled with doctors and nurses.

I had started experiencing very painful protracted contractions, and the doctors worried I was experiencing a placental abruption. They brought in a portable ultrasound machine but couldn’t find any sign of an abruption. They performed the only internal exam of my entire pregnancy and determined my cervix wasn’t changing. I was losing a significant amount of blood so they started an IV (the most painful part of the entire process – it took them three or four tries and left me very bruised). My uterus was contracting but not relaxing often, and the pain was significant.

Finally, the doctor in charge came back and said she thought we should do an emergency c-section. I was 34 weeks and 2 days pregnant. Once in the operating room, my fiancé disappeared to get his scrubs on. The doctors and nurses in the room supported me while they inserted the spinal block and tried to place an epidural for post-surgical pain relief. The epidural wasn’t successful, but the spinal started to take effect, and they laid me back on the surgical table. My arms were held out to the sides and gently restrained to prevent me moving them into the sterile field. They raised a curtain in front of me and placed some oxygen in my nose. My fiancé came in and sat next to me by my head as they began the procedure.

The doctor in charge came back and said she thought we should do an emergency c-section. I was 34 weeks and 2 days pregnant.

I could feel the cutting, but it didn’t hurt. The anesthesiologist explained what was happening (in English) and told my fiancé when to look. Unfortunately, I felt a significant amount of pain when they were going through the muscles. Once they were through, I felt a little bit of tugging and pushing followed by an immense feeling of relief as they broke my water and pulled the baby out. There was no sign of a placental abruption, so despite having all the clinical signs of one, the doctors aren’t sure what was wrong. The doctor handed the baby off to the pediatrics team as soon as he was out. I couldn’t quite see him over to the side, nor could I hear him crying immediately. My fiancé went over to see the baby as the team was working on him. His Apgar score at birth was only 4, and he was somewhat blue and floppy. They asked his name (Tristan), and his dad was able to symbolically cut the cord before they wrapped him up and brought him over to see me. I was only able to give him a quick kiss before they whisked him off to the NICU.

The team finished up the c-section and stitched me back up. They transferred me to a different bed and wheeled me straight back to my room (I didn’t require any time in recovery). I met my fiancé on the way there, and the nurse brought us beschuit met muisjes, which my fiancé had to feed me! Shortly thereafter, they wheeled me on my bed to the NICU to see Tristan. He was on continuous positive airway pressure (CPAP) but was doing fairly well otherwise. He weighed 2025 grams. The nurses took a photo of him and printed it for me; later that night when they had removed the CPAP they printed another so I could see his face.
I spent 8 days in the hospital, which was the maximum that our hospital would allow. The first five were deemed medically necessary, and for the final three nights, I was on a logeertarief, which was permitted because my son was in the NICU. My insurance would have paid for more time, but the hospital wouldn’t allow it because they needed the space. My recovery went well, and I was out of bed within about 36 hours of surgery. I had intramuscular morphine injections for the first night and day after surgery, and after that, I only used paracetamol for pain relief.
Several times per day the nurses would wheel me down to the NICU to see and do skin-on-skin with Tristan. I pumped, and he was fed only breastmilk by day two or three when my milk came in. Tristan ended up staying in the hospital for 20 days. He had issues digesting milk and his weight dropped to 1790 grams, He was also battling an infection. He constantly needed new IVs inserted to give enough access for the IV nutrition and antibiotics that he needed. Eventually, he improved enough that he was able to come out of the incubator into an open bed. Once his IVs came out, we were able to bathe him and perform most of his care while we were there. 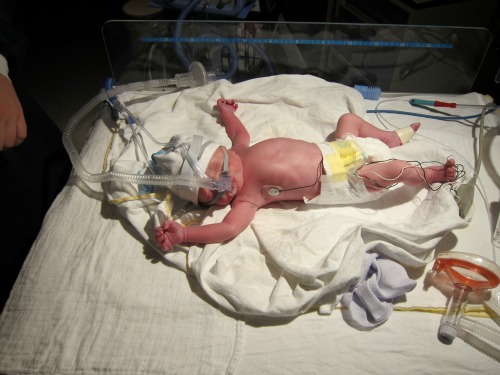 Luckily, we live only about 5 minutes from the hospital by car, so we made the trip twice a day. It wasn’t a lot of fun going over the bumpy Dutch roads with my healing incision, but it was worth it to see Tristan! The hospital offered a program to room in with infants who have spent a significant amount of time in the NICU. I took advantage of this and spent one night with Tristan getting used to his schedule and with his nurses nearby in case I had any questions. We also got a referral for couveusenazorg, which is extra kraamzorg care for infants who have been in the NICU. My insurance plan covered this, and we were eligible for 15 hours of help over five days.
Finally, on November 28, we brought him home. He weighed 2250 grams and has thrived ever since!